Martin is a firm believer in VR as a creative platform. Among the first in the world to adapt to using VR as a main tool in his daily work, Martin has already worked for some of the biggest players in the field including Oculus Medium and Quill. Now, he works part time as the artistic director for Canadian based startup MasterpieceVR, from his home in Denmark. Aside from VR he has worked as a freelance illustrator for 15 years, he teaches kids the art of Manga, and is also a writer for 3D world Magazine and Imagine FX.

Taking VR to the next level 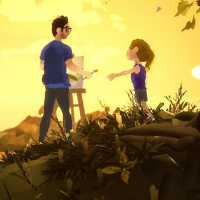