Mark is creating concepts and illustrations for the entertainment industry for 12+ years both as in-house artist and as a freelancer. After living and working across three continents, he moved back to Hungary to help establish the Pixoloid Studios, what he currently leads.
His previous film and game credits include the 5 BAFTA winning Hellblade, 6 Emmy nominated The Alienist, 4 British Independent Film Awards nominated Colette, Maze Runner, Godzilla and Riddick, to name a few. Beside his entertainment design works he also creates illustrations for such well-known ip-s as Star Wars, Dune, Warhammer and Cthullhu.
He wrote tutorial articles for ImagineFx, Advanced Photoshop and other online magazines. He is the author of the crowdfunding success book about concept design Behind the Pixels. 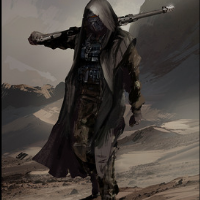