Adam Dewhirst is a Build supervisor for DNEG London. He has over 15 years experience in VFX spanning Games, film, TV, commercials and children’s television.

Adam film career started at Framestore, before moving onto Cinesite, MPC, Mill film, passion pictures and the BBC. His first film credit was for The Golden Compass, which went onto win both an Oscar and a Bafta. His lead Modeler credits include WWZ and Guardians of the Galaxy where his team were responsible for bringing Rocket Raccoon to life. He has worked on notable films such as The Dark Knight, Clash of the Titans the John Carter of Mars.

Adam joined the Mill in 2014 as a senior creature modeler, he spent 2 years at the mill London, before moving overseas to take up the roll of head of assets for Mill NY. In that time he has overseen spots For Budweiser, Monster.com, Playstation and The US marine core to name a few.

My Metropolis: how to build a city in a day. 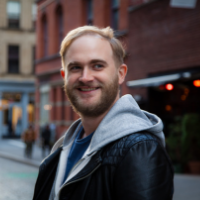